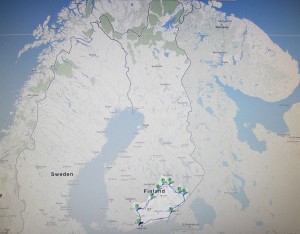 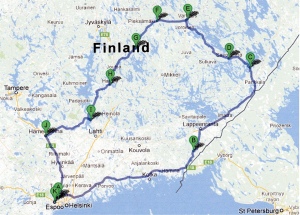 We are going to go on a road trip 🙂

The reason for this trip is a place called Punkaharju.  Punkaharju is in the east of Finland. The C on my maps above. Punkaharju ridge is famous for it’s beauty.  On our very first road trip in 1970 to Lapland our first stop was in Punkaharju. We camped the night there.  I’m excited to find out how it looks today.

Yesterday we were ready to hit the road at 9:15 am. We had been driving about 35 km when I realised I had forgot couple of important things behind. I said we need to go back home and get them. Leif was not happy at all to have to drive back. Well, neither was I but it had to be done. Telling son and cats bye one more time.

We left again. The plan was to drive to Ylämaa. It is about 250 km from where we live. We have friends there and we would stay the night there. We took the road E18 all the way to Vaalimaa. We made two stops during the day. Once to eat and once for an ice cream. Only one kilometer before the Finnish/Russian border We turned to road 387 to Ylämää. 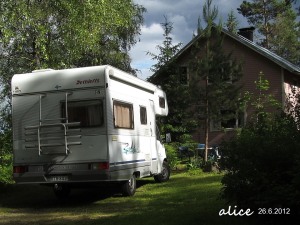 Yes, a great day. Thank you dear friends for having us there.

After breakfast, we said thank you to our friends, hugged and waved them goodbye. They told us that there were two or three different possibilities to drive to Lappeenranta. We decided to take a narrow road that runs along the Finnish/Russian border to Vainikkala and there turn to Lappeenranta. To the right of the road, there was signs at regular intervals that pointed out STOP, frontier zone, no entry without special permit.  In Vainikkala we stopped to have a look at the Railway station.

The road through woods alongside the border.

After having the strawberries we continued. We had planned to visit the Saimaa canal.  Suddenly the weather changed and it began to thunder. A heavy rain was pouring down. We decided to skip the canal as we had been there and seen the canal a couple of times very long ago.

Shooting the river Vuoksi through the camper window.

From Lappeenranta we continued to Imatra.  The weather changing from rain to sunshine all the time. We did not stay to have a look at the river Vuoksi where they in the summer time let the rapids run free daily at 6 pm.

About 90 km drive from Imatra to Punkaharju. Still rain pouring down from time to time.  I really hoped it would stop before we arrived in Punkaharju. Our main attraction of the trip. the purpose of this trip. Yes, we were very lucky.  The rain stopped.

Driving the road number 14, the Savonlinna road the weather cleared, we saw this clear blue sky and the sun began to shine. Amazing. I was so happy.

The actual ridge is about 7 km. The road is narrow. At the highest it is about 25 to 30 m over the lake. You can see lake on both sides of the road all the time. 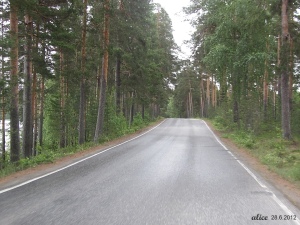 We drove the ridge back and forth twice 🙂 My pictures, unfortunately, does not do justice to the beautiful views. You really need to see and experience it yourself.

After the very nice weather in the afternoon and the evening there was a thunder and a heavy shower at about 9:30 pm. I saw the dark clouds when I went for a walk with Canelo but I though we would make it back before the rain. We did not. Even if we had not a long way back to the camper we were very wet. Like we  hadswum in the lake 😀

Despite all the rain it was an enjoyable day. Worth coming back after 42 years 🙂 Next time we come here we will stay for a little longer. 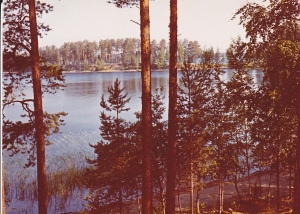 The camping area we stayed at in 1970 was no longer there. We were not even able to exactly remember where it was. The woman at the reception desk told us this “new one” is in a different place.  Also a very beautiful place. Well, there are only beautiful place around there. For more information about the campsite please click on the link below.

We took one more drive over the ridge. Our next stop would be in Savonlinna which is only about 20 km away from the campsite. The sky was a little gray but it was not raining.  Again we were able enjoy the very beautiful scenery. Only the closer we came to Savonlinna the darker the clouds. Luckily there was only a few light showers during our stay there despite the really dark clouds hanging down from the sky.

I went down to the Olavinlinna castle. It was too early still to make a visit as they would open at 11 am. I just strolled around in the area and took some pictures. 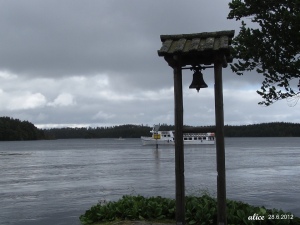 The Savonlinna Opera Festivals take place from July 5 to August 4. The city and all the restaurants, hotels, ship companies, yes everyone was busy making things ready to welcome all the people indvading the city for the festivals. 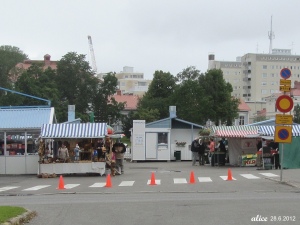 After the Olavinlinna and Riihisaari we walked to the market square. We had “torikaffet” (coffee)  there. I bought a T-shirt for myself and a postcard which we sent to Leif’s 86 years old aunt.  What a beautiful and nice city. I hope it will be warm and sunny there for the festivals and for the rest of the summer.

After midday we left Savonlinna. We sticked to our plan and drove to Varkaus. I don’t know why but we actually did not stay there other than we bought hamburgers which we had in the camper. We looked at our route map wondering whether to stick to it or make some changes. After some thinking we decided to drive to the next locatin which, according to the map, was Pieksamäki. We thought it would be a good idea to at first find the camping area and then drive back to downtown. When we arrived at the campsite we actually were too tired to go back for sight seeings. No wonder we were tired we had woken and got up already at 5. We spent an relaxing evening. Walking Canelo. Reading. Watching TV. Maybe we’d go back to downtown Pieksamäki tomorrow. 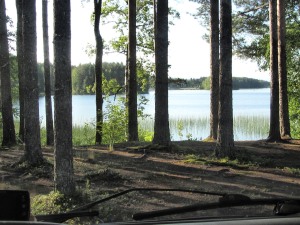 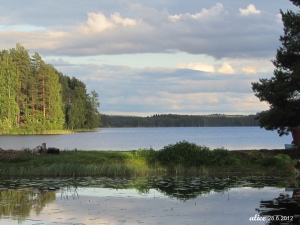 Also today we woke at 5 am ! The same morning procedure as yesterday. Coffee, shower, walking Canelo. As soon as the reception opened we left the key and headed southwards. 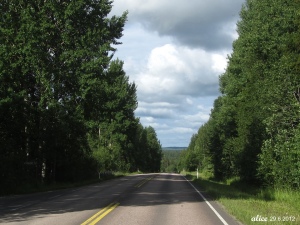 Next stop would be in Kangasniemi where Leif’s friend has a summer cottage. Well, he was not there ! We called him and he said, please wait, I’m going to come there tomorrow.  We said no, not this time, we’ll come an other time.

Next place would be Hartola where my cousin have a summer place. Leif set the navigator on Hartola.  The first Hartola sign came up but we didn’t turn as the navigator didn’t say so. Then came the next sign, still the navigator said we should drive many more kilometers. I thought it was odd and asked Leif did you really set the navigator on Hartola. Yes, of course he said. OK. We kept driving. We passed a third sign saying Hartola. Navigator still wants us to continue. Now I told Leif I think you have a mistake. Nope. He was convinced he had written Hartola ! Then after still some kilometers navigator woke up and said turn to the left after so and so many kilometers. We turned. Driving the road it looked like we were in the middle of nowhere. According to the navigator it was the right track. After several kilometers we figured out we were kind of lost.  Only explanation is that Leif had wrote the wrong destination. Nothing so bad  not to be good for something. Had we not got lost then we had not seen the two hawks. I saw one, a  rather small one, sitting on a wire. I told Leif, look look a hawk. He didn’t see it and said are you sure it was a hawk. Yup ! I was sure of it. A few minutes later one, a big one, came “sailing” with his wings spread, just passing our front window only about 5 meters away. I shouted look, look. Now he too saw the hawk. It was amazing. All the time in the car I had my camera in my lap but a minute before I had put it away ! I was very, very disappointed  not to get a picture of the hawk. I looked them up at home from my bird book and from the net. The small one was a “Accipiter nisus”. The big one, according to Wikipedia, medium size hawk, was a “Buteo buteo”.

Now we decided to go straight home instead of driving to our friends in Hämeenlinna.  We clicked the navigator on home. It took us via Heinola and Lahtis.

As always, it’s nice to be on the road but coming back home is also nice.