Every summer since 2006 when we bought our first camper we have talked about to visit the Åland Islands. But as we already made a road trip in the end of June we thought we’d leave visiting Åland till next summer.

Friday 10 August I was surfing the net reading about Åland and looking at pictures. Next minute I was checking for ferries to Åland. Then the weather forecast for week 33. Hey, Lefa listen, I shouted. What about going to Åland next week. What ? Next week ? I thought you said we’ll go there next summer he said. Well, I said, now would be the perfect time. The weather forecast is excellent. The ferry is cheaper now when off season. After some thinking he said OK. I was quick to book the ferries before he would change his mind. Yes, departure on Tue 14. Return on Fri 17.

We left in the evening. The drive to Turku was nice. We drove the old highway to Turku instead of taking the motorway. Nice and peaceful driving. Practically we were alone on the road. One camper was driving in front of us for a long time.  I thought they too were heading for the harbor but just before Turku they turned away. Arriving the harbor at about 22:30 pm we stayed the night there or actually just outside.

We all three, Leif, Canelo and me slept well. Like babies 🙂 but still woke before the alarm clock rang. Leif made the coffee. We had a quick breakfast and then off to the check in to stand line to embark.

As we were there in good time I still had time for a walk with Canelo in the Turku Castle park for a good 30 minutes.  I saw from the park that the line began moving forward. 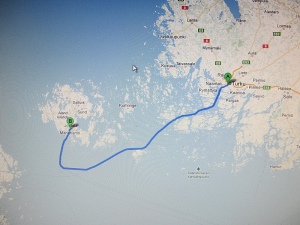 It was nice and warm so we spent the day out on the deck enjoying the views. 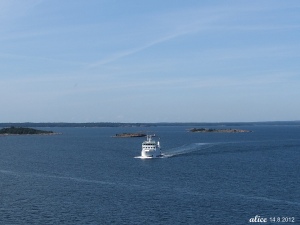 Canelo was OK with climbing the stairways all the way to the top, to deck 10. On the way down he hesitated for a couple of seconds but then stepped down without problem. 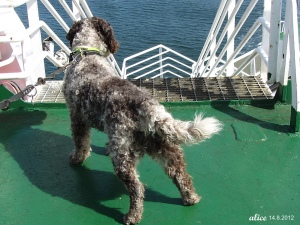 We arrived in Mariehamn at 2:10 pm. We parked the camper and strolled in the center for some hours. We have only been in Mariehamn once. It was in 1973. Hard to believe it is that long ago, 39 years. Have I mentioned I have my fashion shop in the pedestrian zone. Nah, just kidding 😉 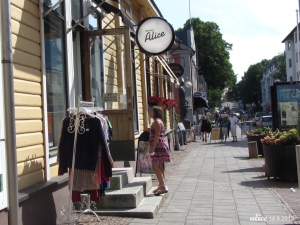 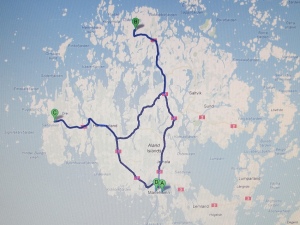 We decided to drive to Getabergen in the morning and to Eckerö on the way back to Mariehamn in the afternoon. Getabergen looked the same as in 1973 only there was a new cafeteria. The weather was nice and the views beautiful. It was actually very warm. About 25 degrees Celsius.  We had coffee and chocolate cake on the terrace of the cafeteria. 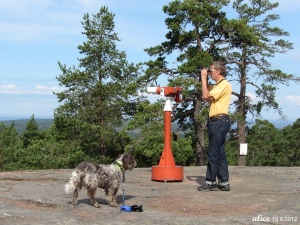 After the coffee we were ready to continue. One of Leif’s friends had recommended a place, a junkyard or maybe more like kind of flea market or so. Of course Leif had to look for it not even having any exact address.  Eventually we found the place. Lo and behold ! He didn’t buy anything from there : D

Outside a grocery a young boy and a girl were selling blueberries. I bought one liter. Some of it we ate with sour milk. Yummy. There still was some left when we came back home so I made a blueberry pie.

In Eckerö we visited the old Mail and Custom’s House. For many hundred years the mail from Stockholm to Helsinki passed via Eckerö. Both the building and the surroundings are beautiful. After visiting both the custom’s museum and the art and craft exhibition we  headed back to Mariehamn. 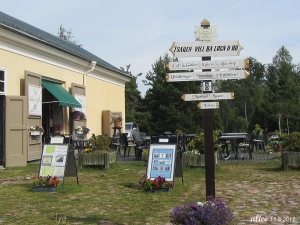 Back in Mariehamn we went to have a “Sibylla” meal. It’s similar to McDonald’s meals. The meal made us good and we decided to still go down to the west harbor to check the opening hours of t he Maritime Museum for the next day.  Leif was flabbergasted to meet three guys he had worked with when he still was at work. What a coincidence ! Few minutes earlier or a few minutes later that had not met. They talked for quite a time. I, I met a wonderful sweet, friendly, loving, cuddly cat to talk to and to take pictures of.

How wonderful to meet my cousin today and to spend the day together. We had coffee and the Åland delicacy “Åland’s pancake” at “Bagarstugan”. 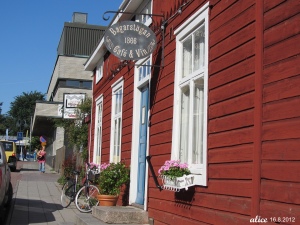 We visited the Maritime Museum and the four-masted barque Pommern. 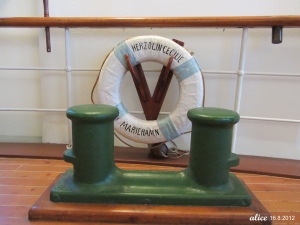 My father in law was a sailor. He sailed both as mate and master on many different sailing ships and later on different motor vessels. He sailed the four-masted barque Hertzogin Cecilie in the end of the 1920’s beginning of the 1930’s as a mate. 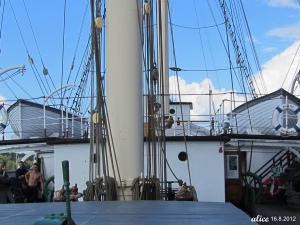 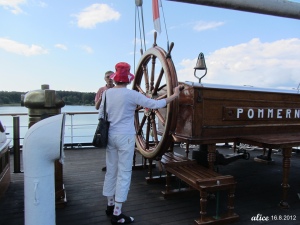 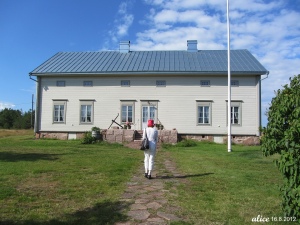 On the way back from Långnäs we decided to have coffee at “Skepparstugan Pellas”. Unfortunately we arrived just after closing time.  My cousin told us about the history of the place.  There’s the cafeteria, it’s a museum, there are held exhibitions,  theater in the summer etc.

Oh no ! Already last day ! Woke early at about 6 am. The sunrise was beautiful so I walked down to shore and took some pictures.

After the morning coffee we checked out from Grona Udden and went strolling the Maritime quarter of Mariehamn. A nice place with its museums, restaurant, the SALT artisan’s shop etc. 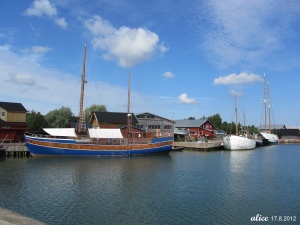 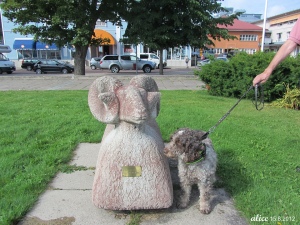 On the way to the harbor we still had time to drive up to the “Usiktsplatsen” to enjoy the views. 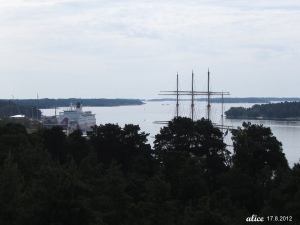 Bye, bye Mariehamn. Last glimpses of Mariehamn and Pommern shot from on board Viking Isabella. I hope I will be back soon. 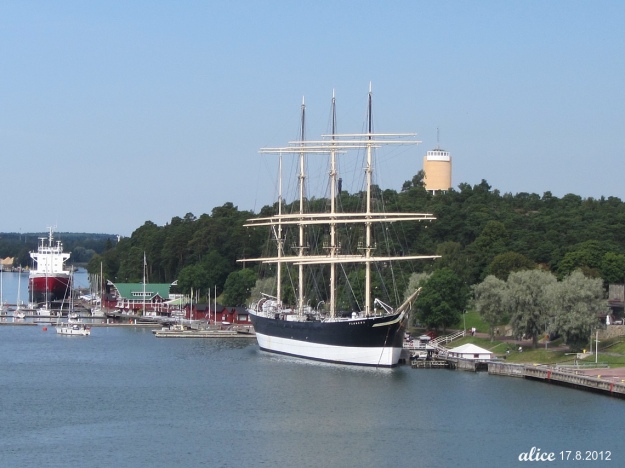 About one hour before arriving in Turku there were lots of sailing boats. I think they looked like butterflies in the distance. It was beautiful. 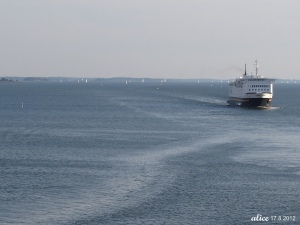 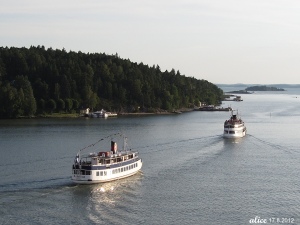 We were back at home at about 10:30 pm. No matter how wonderful it was it sure was great to come home.