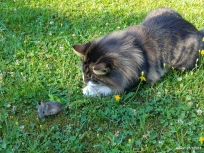 Last night I woke to strange sounds coming from the living room. I told my husband “I think Jacky’s got a mouse. YOU go see what you can do !” He came back and said “It’s a mouse and I couldn’t get it”. Maybe it’s gone in the morning.” It was not ! Jacky found it under the bed. I told him to take it out,  t a k e  i t  o u t. Which he did. I looked out the window. There they were. Lying in the grass staring at each other. The mouse shivering in horror. I grabbed my phone to get some photos. Then went back in. A few minutes later I was not able to see neither of them. I felt bad for the mouse and kind of wanted things to end well for him but, on the other hand I wish Jacky took care of him so he won’t come back next night.