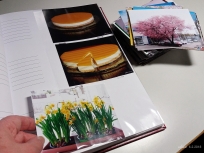 Finally my 2017 photos are in a slip in photo album. I’m happy I have photos, starting 2010, in the old fashion way, in real albums and not only on my computer. I said to my husband that of all the of the hundreds photos I shoot per year I will choose only 200 per year. Good thing is the paper photos are not as expensive anymore as they were in 2001 when I bought my first digital camera. In 2016 it was so difficult to choose only 200 so I ended up ordering 300. And guess what ! I just had to have 300 photos for my 2017 album too 😀 But, that’s the limit. There is not going to be 400 for 2018. We, of course, have several albums with photos from the time back to when we met and married. But, I wish I had arranged all our photos into albums. There are many boxes with photos. Maybe I some day will have the energy to arrange them.