After, I can’t remember, for how long, for how many years our roof leaked when bad weather with strong winds and rain pouring down. I wrote about it my posting in September 2012. It certainly was not the first time it leaked but this time we had to put a bucket in the living room. We temporary fixed it using strong tape. The tape didn’t last for long. Every fall and spring we needed more and stronger tape. We knew we’d have to have it repaired sooner or later. Sooner would have been fine but as we knew it is expensive we always felt we needed to postpone it, awaiting for better times to come. We still might be waiting but about a month ago a man came by and introduced himself. A salesman from a roofer company. He inspected the condition of the roof and gave us an offer.

As we wanted to have something to compare to.  We contacted an other roofer and asked them for an offer. The offers were similar, almost identical. But, the new offer was clearly cheaper. I was still hesitating a little to sign the contract but was soon convinced. Now or never. The best thing is to, as soon as possible, before the next time it would rain cats and dogs have it done and over.

The contract said the repair would take 1-2 days. We were a bit skeptical and thought a week probably would be closer to the truth. On Tuesday morning, September 30 at 7:30 am they arrived. In the afternoon at 4:00 pm they left. The contract said the repair would take 1-2 days. We went outdoors to see how much they had done. Gosh that was super fast ! We were, as our neighbors too, blown away by how quickly the work was done. Only a few last details to finish the next day. On Wednesday, in four hours everything was ready and the yard cleaned up.  Wow ! A new roof in practically one day. Well, one and a half. Less than two days 😀 Like in Extreme Makeover: Home edition, a new home in one week 🙂

After 25 years our old roof looked terrible, so worn out, you could hardly tell what color it once was. The new roof looks so good. I hope it will last at least for as long 😉 And I’m sure there will be no more leaks. We are pleased and satisfied. Thank you team Antti at Hämeen Laaturemontti, well done 🙂 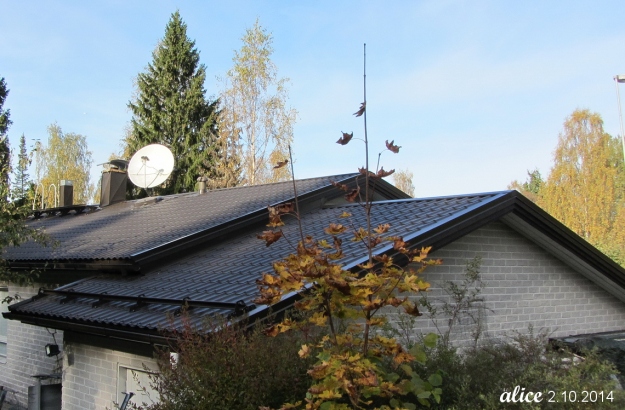