From time to time I suffer from neck and shoulder pain. Have been a bit stiff in my neck for some days so yesterday I bought a ‘Sleepy Sheepy Merino Wool Neck Pillow’. I had wanted one already for a long time. Only I always thought of the them as a  bit expensive.  Now the pillows were only half of the original price.

BUT, I’m in trouble now ! Canelo is fully convinced it’s a toy that we bought for him. He was sooo happy when he saw it and so, so, so disappointed when I told him it’s not for him. He just can’t understand why he can’t have it. I hate to look at him, to see his sad eyes telling his feelings are deeply hurt.

No matter how well I hide it he is able to sniff it up. Should I give it to him ? Should I buy one more ? I don’t know. I probably will end up giving him the sheep.

It’s crazy. I also have merino wool booties. He’s never wanted them for a toy ! Is it the shape of the pillow that attracts him. 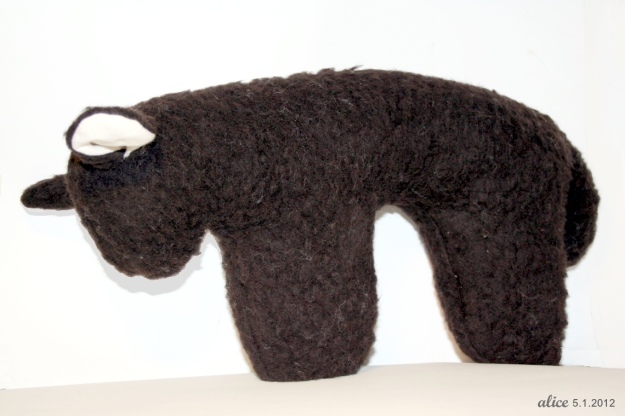 Hmmm . . . actually the pillow very much look like Canelo. Maybe that’s why he likes it so much. 🙂