Kaj, auntie Irene, mom and me. 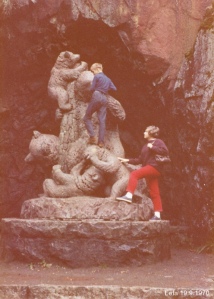 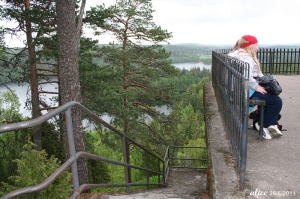 A popular place for spring excursions.

We were staying at our friends in Hämeenlinna all week. While our friends were elsewhere we decided to visit the Aulanko Hill where is a lookout tower, a lookout platform and a bear cave.

Back there after about 41 years we were pretty baffled about the fact that there was this lookout tower. Neither of us were able to recall it from out visit long ago. I suggested it had not been there back then. For some reason we simply must have forgotten the tower because it has been there then. It was built in 1906-1907. I must have enjoyed the scenic lookout platform so much that I never noticed the tower.

I was able to remember the many steps down to the bear cave. We told my mom and aunt it is a piece of cake to climb the steps down to the cave. There is a sculpture of a bear family. I’m so amazed they both, then, older than we are now, actually did all the steps down and then back up. WOW ! I say they were some tough women.

Neither of us climbed the tower nor the steps down to the cave this time. I’m sure I would not have made it  . . . or it had taken me a week 🙂

It was a nice to be back there after such a long time. When walking down the hill to the car hubby said if we are waiting another 40 years to come back we will be 105 !